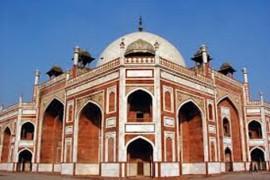 Day 2 Delhi – Agra: This morning after breakfast, proceed for a half-day tour of Old and New Delhi. Visit Jama Masjid, which is the largest mosque in India, commissioned by Emperor Shah Jahan. The courtyard of the mosque can hold about 25,000 worshippers. Enjoy a rickshaw ride in Chandni Chowk, the busiest market in Old Delhi…noisy, chaotic and uniquely Indian. Drive past Red Fort, President House, India Gate and several other government buildings in Edwin Lutyen’s modern Delhi before you head to Rajghat, the memorial to Mahatma Gandhi that marks the spot where Mahatma Gandhi was cremated in 1948. Later visit Humayun’s Tomb, commissioned by Humayun’s wife Hamida Banu Begum in 1562. It was the first garden tomb built in the Indian sub-continent where the Persian architect used red sandstone on a large scale. Thereafter, drive to Agra (210 kms / 4hrs drive approximately). Arrive Agra and check in to your hotel. Overnight in Agra.

Day 3 Agra – Jaipur: This morning after breakfast proceed for a half day tour of Agra. Visit the Red Fort, which was commissioned in 1565 by Akbar, and subsequently embellished by other Mughal Emperors. The beautiful yet forbidding structure houses many exquisite palaces, and is a handsome example of Mughal architecture. Also visit the Taj Mahal … a mausoleum built as a symbol Emperor Shah Jehan’s devotion to his beloved queen Mumtaz Mahal. Considered an architectural marvel, its construction took thousands of workers over 21 years to complete. Thereafter, drive to Jaipur (232 kms/5hrs 30 minutes drive approximately). Enroute visit Fatehpur Sikri, which was built by the Emperor Akbar and is home to many historical buildings. The Tomb of Sheikh Salim Chishti enshrines the burial place of the Sufi saint who lived a religious life here. Today, Fatehpur Sikri is a UNESCO World heritage site. Arrive Jaipur and check in to your hotel. Jaipur is the gateway to the magnificent and vibrant state of Rajasthan. Overnight in Jaipur

Day 4 Jaipur: This morning after breakfast proceed for a full-day sightseeing trip of Jaipur, also known as the ‘Pink City’… it is famous for its colorful culture, forts, palaces, and lakes. Visit the Amber Fort… a fascinating blend of Hindu and Mughal architecture. The best way to explore the fort is to ride up to it on Elephant back. Later, stop to photograph the beautiful Hawa Mahal, also known as the “Palace of the Winds.” This beautiful façade with its ornately carved latticework windows is made of pink sandstone. Post lunch, visit the City Palace… again, a synthesis of Rajasthani and Mughal styles. Later, visit the Jantar Mantar Observatory, comprising geometric devices for measuring time. You will also visit the Albert Hall, which was modeled on the Victoria and Albert Museum in London and is a fine example of Indo-Saracenic style of architecture. Overnight in Jaipur.

Day 5 Jaipur – Jodhpur: This morning after breakfast drive to Jodhpur (320 Kms /6 Hrs 30 minutes drive approximately). Arrive Jodhpur and check in at your hotel. Rest of the day at leisure. Overnight stay in Jodhpur.

Day 6 Jodhpur: Today, take a full-day sightseeing trip of Jodhpur, which is the second largest city in Rajasthan and also called the ‘Sun City’. Visit the Mehrangarh Fort. This spectacular fort made from red sandstone stands on a perpendicular cliff above the skyline of Jodhpur. Also visit Jaswant Thada, a marble cenotaph built to commemorate Maharaja Jaswant Singh II. The monument, in its entirety, is built out of intricately carved sheets of marble. Next, visit Umaid Bhawan Palace, which is one of the largest and grandest private residences in the world. This golden-yellow sandstone monument was conceived on the grandest possible scale, in the fashionable Art Deco style of that time. Later, drive past the Mandore garden, which showcases cenotaphs of Jodhpur’s former rulers, built along the lines of Hindu temples.

Day 7 Udaipur: After breakfast drive to Udaipur (290 Kms/6 Hrs drive approximately). Arrive Udaipur and check in at your hotel. Overnight in Udaipur.

Day 8 Udaipur: After breakfast proceed for half-day tour of Udaipur Visiting the City Palace, standing on the east bank of Lake Pichola. The complex is a massive series of palaces built at different times from 1559. The balconies of the palace provide panoramic views of the Lake Palace Hotel and Jag Mandir on one side, and the city of Udaipur on the other. The paintings, mosaics, intricately carved ‘chhatris’ and the architecturally brilliant facade all contribute to making your visit to the City Palace a truly experience. Thereafter, visit a picturesque garden, Sahelion ki Bari. You will visit also visit Jagat Temple, which is dedicated to Goddess Ambika- a form of Goddess Durga. Built in 961 A.D, this temple is renowned for its intricate carvings in the exteriors. In the evening, enjoy a common boat ride on Lake Pichola, which is an artificial fresh water lake, created in the year 1362 AD.  Overnight in Udaipur.

Day 9 Udaipur – Delhi: This morning after breakfast you’ll be transferred to domestic airport in time to catch flight to Delhi. Arrive in Delhi, you will be met and assisted by a Tamarind Tours representative and transfer to your hotel.

Day 10 Delhi – Overseas:  Today you will be transferred to the airport for your flight for onward connection.