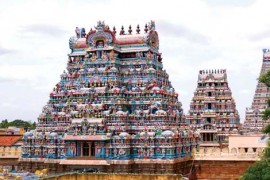 Day 1 Chennai: Arrive in Chennai, you will be met and assisted by a Tamarind Tours representative and transfer to your hotel. Overnight in Chennai.

Day 2 Chennai: After breakfast proceed for half day city tour of Chennai.  Formerly known as Madras, the city of Chennai is nourished by its rich traditions… classical music, architecture, art and dance form an indigenous part of the city’s identity. Visit Fort St George… built in the 17th century, this fort houses St. Mary’s Church and a museum. St. Mary’s Church is the oldest Anglican Church in India. Visit the Kapeeleshwara Temple, dedicated to Lord Shiva. The Gopuram, or entrance tower, has a profusion of sculptured images depicting stories from Puranic legends. Next, visit the San Thome Cathedral, named after St Thomas, the doubting discipline of Jesus Christ.  Located at the southern tip of Marina Beach, it features a beautiful stained glass window at the basilica, depicting the story of St Thomas. Drive past Marina Beach, the second longest beach in the world. Rest of the day at leisure. Overnight in Chennai.

Day 3 Mahabalipuram: After breakfast proceed to Mahabalipuram (65 kms / 1 hr drive approximately). Arrive Mahabalipuram and check in to your hotel. Later proceed on a half-day tour of Mahabalipuram. Mahabalipuram lies on the Coromandel Coast, and was a well-established seaport between the 7th and 10th centuries. Visit the Panch Rathas or Five Ratha temples…. of the nine monolithic rock-cut temples found in Mahabalipuram, the most important are these, dedicated to the five Pandava brothers from the epic Mahabharata. The Dharmaraja Ratha is named after the eldest Pandava, and is the largest one in the line up. It is dedicated to Lord Shiva. Visit Arjuna’s Penance, the massive rock cut bas relief sculpture. It measures 27 meters in length and 9 meters in height, and depicts the story of Arjuna. Later, visit the Shore Temple … a five-storied structure made out of finely cut granite, and one of the earliest and most important structural temples. UNESCO has listed it among the world heritage sites. Rest of the day at leisure. Overnight in Mahabalipuram.

Day 4 Pondicherry: After breakfast drive to Pondicherry (90 kms / 2 hrs approx). Arrive Pondicherry and check in to your hotel. Later proceed on a half day tour of Pondicherry. The city is referred to by names such as ‘India’s Little France’ and ‘The French Riviera of the East’. This territory was under French rule for around 280 years. It still retains its French flavor, seen in the colonial mansions, beautiful boulevards, promenades, and street names on signboards. Visit the Shri Aurobindo Ashram. This world-renowned ashram was founded in the year 1926, by Shri Aurobindo, a revolutionary turned Yogi from Bengal along with The Mother (Mira Alfassa), a French painter and sculptor. The ashram attracts people from all over the world. Later, visit the Government Museum… this multipurpose museum houses sculptures from Pallava, Chola and Vijaynagara temples. The terracotta figures, amphorae, burial urns, glass beads have been excavated from the surrounding historic environment. Thereafter, drive past the beach promenade. Rest of the day at leisure. Overnight in Pondicherry.

Day 5 Velankanni : After breakfast drive to Velankanni (207 Kms/3 Hrs 30 Minutes Drive approximately). Arrive Velankanni and check in to your hotel. Later proceed for City Tour of Velankanni, Visit the Vailankanni Church : Vailankanni is fondly known as the ‘Lourdes of the East’ because like Lourdes in France, millions of pilgrims visit the Shrine throughout the year, praying to Our Lady for various needs and thanking her for the favors received through her intercession. Also visit the Vailankanni Beach – Sobriquet name of this beach is Lourdes of the East as both the places experience a large number of pilgrims on an annual basis. There are a couple of festivals that go on in the months of August and September. These are major tourist attractions of this Beach. Also visit the Basilica of Our Lady of Good Health – The Roman Catholic Basilica is devoted to Our Lady of Good Health. Devotion to Our Lady of Good Health of Velankanni can be traced to the mid-16th century and is attributed to three miracles at sites around where the Bacilica stands: the apparition of Mary and the Christ Child to a slumbering shepherd boy, the curing of a lame butter milk vendor, and the rescue of Portuguese sailors from a violent sea storm. Rest of the day at leisure.  Overnight in Velankanni.

Day 6 Trichy: After breakfast drive to Trichy (150 Kms/ 4 Hrs drive approximately) Enroute Visit Thanjavur…. the centre of Tamil learning and culture. Visit the Brihadeshwara temple, also known as the Big Temple; it is the crowning glory of Rajaraja Chola’s reign in 1005 AD. The temple has a gigantic lingam cut from a monolithic rock, about 8.7mtrs height. There is a huge Nandi Bull within the inner shrine of the temple… the second largest monolithic Nandi in the country. Continue your tour with a visit to Thanjavur Palace & Museum, which houses an art gallery, a library, the hall of music, and the audience hall. Drive to Trichy. On arrival check in at hotel. Overnight in Trichy.

Day7 Madurai: After breakfast proceed for City Tour of Trichy, situated on the banks of the river Cauvery. The town and its fort were built by the Nayaks of Madurai. Visit the Rock Fort Temple, a spectacular monument perched on a massive rocky out crop which rises abruptly from the plain to tower over the old city. At the very top is the ancient temple dedicated to Ganapati. Continue your tour with a visit to Srirangam … the foremost of the eight self-manifested shrines of Lord Vishnu . It is also considered the most important of the 108 main Vishnu temples (Divyadesams). The temple complex covers 156 acres of land, and comprises seven concentric walls, and twenty one gopurams or towers. Non Hindus are not allowed the innermost sanctum of the temple. Later drive to Madurai (130 kms/3 Hrs drive approximately). On arrival check in to your hotel. Overnight in Madurai.

Day 8 Madurai Onwards: After breakfast proceed for half day city tour of Madurai, Situated on the banks of river Vaigai, Madurai was the capital of the Pandya kings, and an important cultural and commercial centre as early as 550 AD. Visit the Meenakshi Temple- the heart and lifeline of the 2500-year-old city of Madurai. The complex houses 14 magnificent Gopurams or towers, including two golden Gopurams for the main deities. Next, visit the Gandhi Memorial Museum at the Tamukkam Palace. The museum houses the history and relics of the freedom movement. Continue to the Koodal Azhagar Temple, one of the 108 temples dedicated to Lord Vishnu. Three separate altars feature three figures of Vishnu, in standing, sitting and reclining postures. Later proceed to Airport to board the flight for your onward destination.

Price / Inclusions / Offers are correct at time of publishing and can be withdrawn without prior notice. All Bookings / Prices / Inclusions are subject to availability at time of booking.
Back to Religious